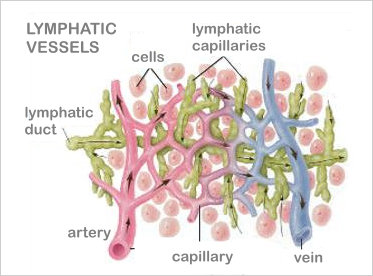 A person’s lymph system is perhaps the most overlooked and least understood part of the body. Comprising the body’s interstitial  fluids many of the body’s waste products and the short chain fatty acids are deposited there. By some accounts it becomes the ‘ trash can ‘ of the body. The lymph system is one of the three ways the body rids itself of metabolic waste. The other two being the bowel and the lung / urinary system, the latter of which is seen as a closed system by itself. The lymph  system is also large as a person has 4 times as much lymph as they do blood.

However, few health practitioners evaluate it as part of their exam except for applied kinesiologists and some chiropractors. This is rather odd as a person can be admitted to a hospital for a major surgery. The patient can be assigned a team of specialists from the surgeon to the cardiologist but no one takes into account the importance of the lymph and it’s role in the healing process. In everyday life the chief offender which can affect the lymph is the partial hydrogenated oils which are common in the American diet. These are almost incapable of being processed by the body’s liver and inevitable end in the lymph system in the form of cellulite. Cellulite can have a half in the body of up to six months.

Once the lymph system becomes congested nutrients don’t flow properly and a person can develop pitting edema and pain and tenderness commonly in the legs and arms. Fortunately there are treatment techniques involving lymphatic drainage and Applied Kinesiology to reduce the swelling and congestion. This usually involves massage techniques along the lymph channel which often correspond to the acupuncture points. Diet also plays an important role as enzyme formula rich in lipase will digest the fat more thoroughly before it heads to the liver or lymph system. Chiropractic Health and Acupuncture is located in Penfield. We serve the greater Rochester NY area including Pittsford, Fairport and the town of Webster. Call today for a free consultation and put yourself back on the road to health.